The Madison County Historic Preservation Commission, (MCHPC) is a seven-member commission appointed by the supervisors and operating in accordance with the Secretary of Interior guidelines, in order to foster the care of historically significant sites by providing education, training and technical services to the citizens of Madison County. 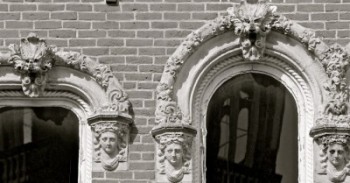 The Madison County Historical Preservation Commission fosters the care and recognition of historically and culturally significant physical and natural sites by providing research and technical services to the citizens of Madison County, in accordance with the Secretary of the Interior Guidelines. Revised and adopted September 2019.

The CLG Program’s Purpose and Objectives

Certified Local Governments (CLGs) can be affiliated with either City government or County government. In 1989 a group of local citizens formed a County CLG that later became inactive. Twenty years later (2009) a group of citizens worked with the County Supervisors to reinstate the Certified Local Government, known locally as Madison County Historic Preservation Commission (MCHPC). Since that time the commission has been actively laying the groundwork for several projects. These are detailed on the pages of this site, with future projects here.

During the 2016 Covered Bridge Festival in October, the MCHPC and their volunteers were honored to be recognized by the Madison County Antique Association on the Mel Penrod Stage. Antique Association President, Connie Bailey, presented the award with these kind words.

“The Madison County Antique Association is pleased to announce that the Madison County Historic Preservation Commission was chosen to receive the Historic Preservation Award for the year 2016. The limestone Courthouse whose steps we are standing on is a significant building to the development of Winterset. Many of the commercial buildings around the square are still historically intact. A desire to preserve these historic treasures led the Commission in an effort to have the entire commercial district listed in the National Historic Register.”

“A group of volunteers spent hours doing research every week on Wednesday. They wrote detailed descriptions of around 104 buildings. They took pictures and recorded all information. The survey was completed and it was concluded that a National Register-eligible historic commercial district was present. The boundary would encompass 83 buildings, 79 of which are contributing and 4 are non-contributing. Many community organizations and individuals contributed to this success. The Winterset Courthouse Historic District became official on December 22, 2015 with the signing by the National Park Service.”